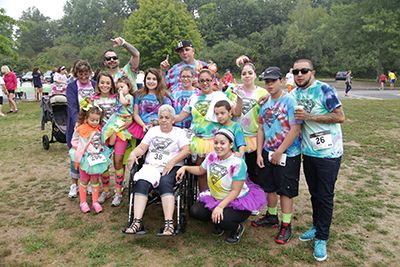 This colorful week of fundraisers kicked off with the Autism SpectRun at Great Hollow Lake, Wolfe Park in Monroe. This first ever 5K Color Fun Run/Walk/Stroll drew over 250 participants, ranging in age from babies in strollers to seniors in wheelchairs. The most outrageous attire of the day included psychedelic spandex pants, striped socks and hot pink hair.

As part of the festivities, children under 12 happily ran through gigantic bubbles created by Casey Carle’s BubbleMania. During this 100 YD Bubble Dash, girls frolicked in pink tutus and boys sported tie-dyed shirts. Poland Spring donated water and Taco Loco provided all participants with food after the race. Chip’s Pancake Truck was also on hand before the race serving up pancakes.

Net proceeds from the SpectRun totaled $17,000. These funds will be used by The Kennedy Center Autism Project to provide affordable accessible programming for the children and young adults with Autism Spectrum Disorder (ASD).

Next, the excitement traveled indoors to the KCAP CUP, the Kennedy Center’s first-ever soccer tournament fundraiser hosted by Goooal Sports in Stratford. This new event was inspired by the Autism Project’s own soccer team, KC United.

This non-competitive indoor tournament was organized by two high school students from Fairfield, Teresa Andres and Katie Rigione. A total of 60 soccer players participated and they raised $6,000 for the Autism Project.

This weeklong celebration culminated with Magic Moments, a colorful cocktail affair at the Westport Inn. The 7-piece What Up Funk Band featuring Jerry Vigorito from Band Together played lively rock and funk music. Multi-colored tablecloths and glow ball centerpieces got the crowd of 200 guests in the mood for fun. Together, the event contributed over $85,000.

During this evening gala, the creation of the Cindy Dworken Memorial Scholarship Fund was announced. Cindy, an Easton resident, was a long-time supporter of the Autism Project and co-chaired the Magic Moments event with her husband Jeff for three years. The scholarship fund, which was dear to Cindy’s heart, provides financial assistance to many local families so their child with ASD can participate in the programs offered through the The Autism Project.

Thanks to the funds raised nine years ago at the inaugural Magic Moments event, The Kennedy Center opened The Autism Project - a program dedicated to providing affordable comprehensive programs and services to families and children with ASD. Because of the generosity of many donors in the community, The Autism Project has served more than 450 families and become one of the leading providers in Fairfield and New Haven counties of these supports for children with ASD and their families.

Established in 2006, The Autism Project provides children and families with information referral and resources; family support and service coordination, financial assistance, support for children in community activities, wrap-around supports, experienced staff and new services for unmet needs within the community.

“The Kennedy Center is so appreciative of the many supporters who participated in our three family fun events during Autism Week,” said Martin D. Schwartz, President and CEO of The Kennedy Center. “State funding is almost non-existent. People of all ages and abilities contributed to our success by either volunteering or donating much needed funds.”