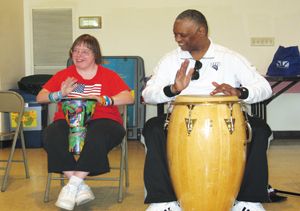 Percussionist Steve Scales has played with the Talking Heads and Tina Turner. Lately, though, he’s led a drum circle for clients of The Kennedy Center.

Scales led a drum circle for the center this weekend. He pounded out a rhythm on his conga drum, and dozens of clients joined in. Each one had a percussion instrument, whether it’s a big bongo or a little maraca. Sometimes Scales would invite someone to join him at the head of the circle and play his drum.

“There’s some of these people they play today, the first day they wouldn’t touch the drum. Now they run to be up here with me.”

Sitting at the head of the circle makes them feel like celebrities. He’ll joke around sometimes and pretend they are celebrities.

Drumming lets Kennedy Center clients express themselves, and it lets them be part of something fun. Scales’ energy is infectious. Everyone’s smiling.

“They’re coming out of their shells and being able to express, without somebody saying, ‘Oh, you can’t do that.’ You make ‘em feel like whatever they’re doing, man, sounds great.”

One of the most enthusiastic clients is Sherry Berglund. She keeps running up to sit next to Scales. Her family came to watch her drum. And her sister Kathy Toth says Sherry has loved music her whole life.

“And she has some sort of an extra beat that none of my brothers and sisters and I can imitate. She’s one of a kind. Right, Sher?” “Yeah.” “Yeah!”

Scales started playing here as part of an internship – he’s finishing a degree at the University of Bridgeport. He says this drum circle has helped him as much as anyone. It’s led him to his calling.

“God gave me a gift. This is who I’m supposed to reach. I did the private jet, round the world, playing hundreds of thousands of people and all of it, I’ve done that. But there’s something else that I need to do now.”

Scales’ internship is over for now, but The Kennedy Center welcomes him to come back and play with the clients any time.