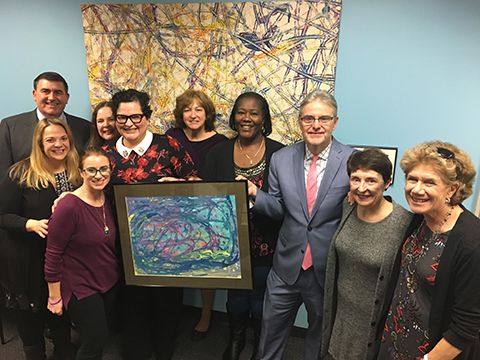 For the past 10 years, more than 50 individuals have found a “home away home” at The Kennedy Center's Norma F. Pfriem Foundation Alzheimer’s Center at Faust Hall, the only program of its kind in the state of Connecticut.

On Nov. 29, 2018, Faust Hall employees, families and supporters gathered to celebrate the 10th anniversary and look toward the future of the program.

Dr. Gerard Kerins, Program Director of the Clinical Fellowship in Geriatric Medicine at Yale School of Medicine, served as the keynote speaker to a standing room-only crowd at the anniversary event and educational forum. Dr. Kerins said the rates of dementia and Alzheimer’s among individuals with Down syndrome remains high —ranging from 50-95% by the age of 60—but the future of research is promising.

“I’m beginning to see the pendulum swing,” Dr. Kerins said. “Ten years ago I wasn’t as confident but I am now seeing we may be coming into a golden age of caring for people with disabilities, which is so important, because they are living longer and they contribute so much to our lives.”

“Ten years from now, when we reconvene, we want there to be more programs like this in our state,” Sebastian said.