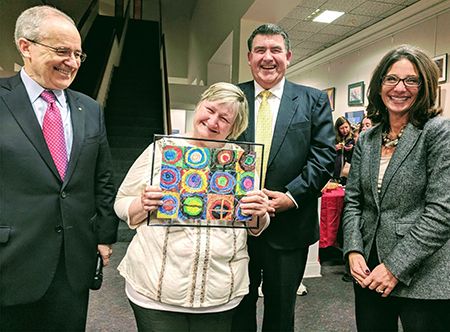 The November reception for A Unique Perspective calendar displayed the vibrant and transformational work of 40 artists with disabilities, in addition to the work of 18 artists featured in The Kennedy Center's 2019 calendar.

More than 250 people attended the reception at Gallery@999 in Bridgeport, located on the second floor of the Margaret E. Morton Government Center.

"The calendar reception represents an annual celebration that brings families and friends together," said one parent of an artist. "The burst of colors on the walls of Bridgeport City Hall and the enthusiasm of all the artists brings joy to us all."

People's United Bank has been a long-time supporter of A Unique Perspective calendar and People's United Community Foundation continues the tradition by underwriting the calendar, allowing for 25,000 to be printed annually.

"For over three decades, we have supported and funded the much-anticipated Kennedy Center Calendar, as it uniquely demonstrates the remarkable abilities of The Kennedy Center artists," said Armando Goncalves, Southern Connecticut Market President of People's United Bank.

Richard E. Sebastian, President and CEO of The Kennedy Center said, “We extend our sincere thanks to People's United Bank and People’s United Community Foundation, who annually underwrite The Kennedy Center Calendar. This vibrant calendar motivates us to be touched, moved and inspired (my acronym for TMI) by the many abilities of our artists with disabilities."

As The Kennedy Center's Expressive Arts program has grown and expanded over the years, the works of visual artists have evolved beyond the mediums of paint, pen and ink, and collage typically found in past calendars. This year a piece of transformational art was selected for the 2019 “A Unique Perspective” Calendar cover. An old bicycle discovered at the local recycling center has been deconstructed and reconstructed into a work of art using the various parts such as chains, reflectors, pedals, nuts and bolts, hubs and spokes.

Six artists at The Kennedy Center’s Project Twenty, a community experience program, were collectively inspired by the abandoned “trash” they had found.  Originating without a preconceived plan, the artwork unfolded organically as the artists sorted through a big pile of bike pieces. Through the exploration of new mediums and tools, they collaborated to rearrange the bicycle in a completely different configuration. Several artists cut wires, while others bent, twisted, and molded existing structures.  One artist enjoyed stringing the washers together like beads and tying them onto the spokes. The possibilities were endless. As the bike, aptly named “Big Mike,” began to transform, it emerged as something beyond what they could’ve imagined. It became a “symphony” of parts moving and working together as one.

These artists challenge the public’s perception of art. By continually reaching out to broaden our audience, more and more people experience the “unique perspective” of an artist with a disability. “Big Mike” on the cover gives a glimpse into the transformative power of creative expression and the positive effect that it can have not only on the artists, but on the viewer as well.

The calendar was designed by Meghan Gerety, a freelance artist in Brooklyn and former Connecticut resident, and was printed by GHP Media in West Haven.