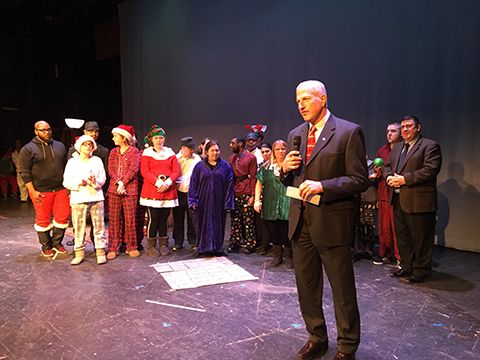 Originally Published Dec. 27, 2018 in The Shelton Herald and The Trumbull Times

The Polar Express streamed through Center Stage Theatre last Wednesday, but not before Shelton’s own Santa Claus presented a special gift to the production’s organizers.

The Kennedy Center’s Project Impact and Project Advance — two of the center’s Community Experience Programs based in Shelton that assist adults with intellectual disabilities — put on the holiday classic in front of dozens of family members and friends.

But the celebration was made more memorable as Mayor Mark Lauretti presented two checks — each for $5,000 — to The Kennedy Center.

“I know the people who are going to be the recipient of (the donations) are well-deserving,” said Lauretti after presenting the check to Project Impact’s Terry McIntosh. “I’ve always admired the work that The Kennedy Center has done.

“I’ve always supported the non-profits, not just in Shelton but in our region,” added Lauretti. “I think it is important to do that. The city of Shelton also has a line item in its budget to help support the efforts of The Kennedy Center. That happens on an annual basis. We’re happy to do that. We’re happy to support people who provide a benefit to other people in our society.”

But the surprise came moments after Lauretti presented the first check when the longtime mayor told those in attendance that — with campaign funds left over from his governor’s run — he was able to donate those extra dollars to 501(c)3 organizations of his choice. With that, Lauretti said he was donating $5,000 to St. Vincent’s Special Needs and another $5,000 to The Kennedy Center.

And with donations in hand, everyone’s attention was turned to The Polar Express.

“This really allows them to show off the skills they have — they practice lines, where they’re supposed to be on stage,” said Barb Anton, supervisor of Community Experience Programs, about the production. “They just get to have fun showing off some of the things they have learned. We’re all so proud of them.”

Anton specifically cited Micheala, The Polar Express narrator, who got to display her reading ability. One of Micheala’s volunteer jobs is reading to children in the library, and this production provided her the chance to show off some of the skills she has developed.

Another performer Anton cited was Saleem, who is non-verbal. But that has not stopped him from performing, as he now uses a computer as a communication tool through which he can read using that device.

The Kennedy Center, founded in 1951, is an internationally accredited, non-profit, community-based rehabilitation organization that currently supports over 2,000 individuals annually. The agency actively responds to the needs of the community by offering innovative, comprehensive service opportunities to persons with disabilities and special needs, from birth to senior years.

Community Experience Programs, also referred to as Day Support Options (DSOs), are located in various neighborhood settings and support small groups of individuals who have disabilities. Each program emphasizes the development of an appropriate skill base to expand learning, choice-making and inclusion within each person’s local community.

Gary Scarpa, director of Center Stage Theatre, offered up his stage for the second year in a row for the Project Impact and Project Advance  holiday production.

“This is such a wonderful opportunity for all of them,” said Scarpa about the performers.

Scarpa, a former guidance counselor at Shelton High, said he knows four of the people from his time at the school and praises The Kennedy Center for providing opportunities for them to get out in community.

“We have people from the programs coming in here (to Center Stage) once or twice a month to help set up for our performances,” said Scarpa.

Anton said these Kennedy Center programs are designed to teach people skills to teach independence and independence in the workforce.

“People are able to advance their work skills, their social skills,” said Anton. “These programs teach them.to be a person … it gives them an identity, helps them develop friendships, self confidence.”

Project IMPACT focuses on community engagement, navigation of community resources and the identification of new community interests and connections. On a weekly basis, each participant will be involved in community volunteering, recreation, social skills, accessing learning environments and discovering new venues of interest.

Project ADVANCE (Accessing Different Ventures And New Chances to Excel) opened in September 2014 and provides services to individuals in their younger years that want to be active and involved in their community. Activities include both volunteer and recreational  community activities as well as curriculum and academics that promote functional skill building. Work skills are taught to help individuals achieve eventual employment.