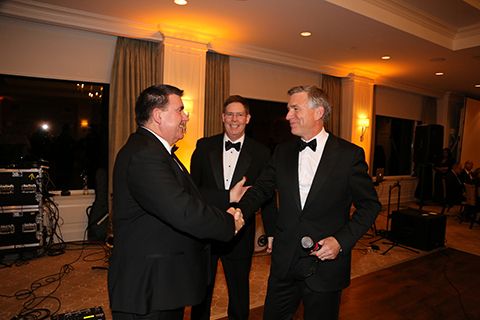 Walsh has been a member of The Kennedy Center Board of Directors for over six years and has provided expertise to the Budget and Finance Committee. Similarly, for over three decades, GE Company has had a long-standing partnership with The Kennedy Center and through this commitment, has made a defining impact to the individuals served by the agency.

“I am overwhelmed with the great turnout tonight,” Walsh said during his acceptance speech. “People have traveled here from all over the country and even Europe. I truly believe in the mission of The Kennedy Center.  They support so many people in the community in a big way.”

Patrons at the ball also enjoyed dancing to the music of Atomic Funk and interactive games, including Heads or Tails and Deal or No Deal — thanks to the help of student volunteers from St. Joseph High School.

The co-chairs of the ball were Peter and Anne Foley, and Pete and Carla Gavey, all of Fairfield. In addition, Peter Foley was Chair of the Tribute Journal.

“The funds raised by the Ball, along with the Tribute Journal, play a critical role in The Kennedy Center continuing to empower people with disabilities,” said Richard E. Sebastian, Jr., President and CEO of The Kennedy Center. “Each year we support more than 2,200 people through the life cycle— from birth to our oldest individual who recently celebrated her 91st birthday. Those individuals, in turn, make meaningful contributions to their communities. The generosity of our community members ensures that these individuals continue to thrive in their communities and creates opportunities for us to support and employ more people, especially through our Social Enterprises.”

Since its inception in 1965, the Four Seasons Ball has contributed over $2.5 million to The Kennedy Center and is one of the longest running, most popular charity galas in Fairfield County.

The Kennedy Center, founded in 1951, is an internationally accredited, non-profit, community-based rehabilitation organization that currently serves over 2,200 individuals annually. The agency actively responds to the needs of the community by offering innovative and comprehensive service and supports to persons with disabilities and special needs, from birth to senior years. The Kennedy Center operates 31 community experience programs, 17 group homes, six Social Enterprises, supported and competitive employment and job placement services, family support services, travel training, and a variety of children’s programs.