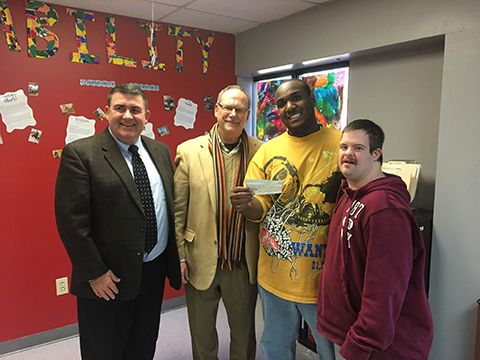 The Kennedy Center received a generous gift right before the holidays, thanks to The Tony Dovolani Golf for Special Needs Children not-for-profit.

Stratford resident George Perham, who organizes the golf event, stopped by The Kennedy Center’s Project Ability on Dec. 19, 2018 to hand-deliver a check for $20,000, raised through the annual golf tournament.

Tony Dovolani, long-time Connecticut resident and a Dancing with the Stars Mirror Ball Champion, has donated proceeds from the invitational to The Kennedy Center’s Autism Project since 2017. The tournament started three years ago at Mill River Country Club in Stratford and because of its popularity, Tony added an additional tournament this year at The Patterson Club in Fairfield.

Individuals in Project Ability, a Trumbull-based community experience program, were thrilled to welcome George and accept the gift on behalf of The Kennedy Center’s President and CEO Richard E. Sebastian.