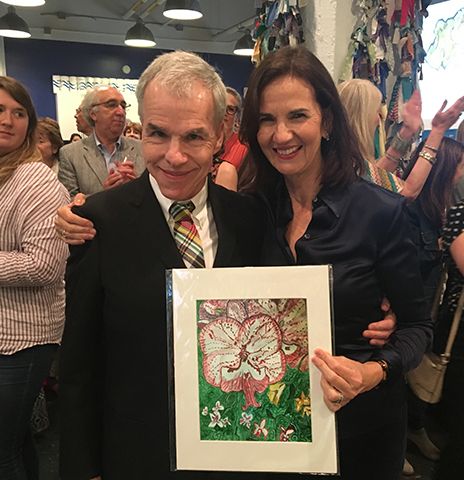 On April 25, more than 150 people gathered at The Kennedy Center’s Maggie Daly Arts Cooperative in downtown Bridgeport to celebrate five years of breaking barriers and building community through art.

The anniversary celebration served as the official opening of MDAC's Enchanted Festival of Trees, an immersive Earthfest-inspired exhibit carefully crafted by MDAC's artists over the last six months. Made from recycled materials, the exhibit is a fitting representation of five years of creative growth and exploration for artists of all abilities.

MDAC, located in the Read’s Artspace building, was named in memory of Maggie Daly, an avid supporter of expressive arts for individuals with disabilities. Deirdre M. Daly, former U.S. Attorney for the District of Connecticut, worked closely with The Kennedy Center to launch MDAC to honor her mother’s legacy. Maggie's son, Michael Daly, is one of MDAC's founding artists.

"They create magic everywhere they go and they partner in every way they can," Deirdre Daly said of MDAC's leadership. "I cannot tell you how much my mother would love this place."

Sebastian said MDAC will play a vital role in The Kennedy Center’s ongoing efforts to bring the arts to the community at-large.

The Earthfest-inspired Enchanted Forest exhibit is open now through June 21, Monday through Friday, from 10 a.m. to 3 p.m. at MDAC, 1042 Broad St., Bridgeport (entrance on John Street).

Learn more about MDAC at www.mdac-kc.org.