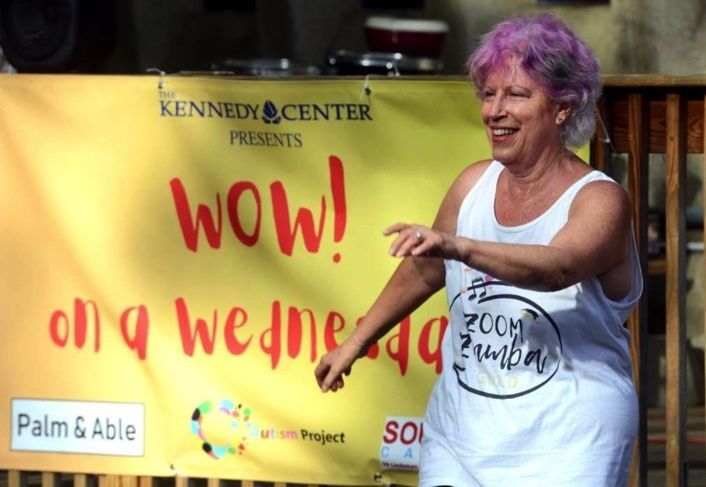 TRUMBULL — He didn’t say much, but Alexander Roman was able to express himself just fine at Wednesday’s Wow on a Wednesday gathering at the Kennedy Center in Trumbull.

Roman, 21, spent much of the afternoon dabbing blue paint on some rocks at the center, taking care to fill in all the gaps as Kennedy Center guests danced to live music and participated in a zumba class around him.

For Jen Narcisco, an art therapist at the Kennedy Center who works with people with disabilities, it was like a conversation.

“It’s just such a great outlet for communication,” she said. “You don’t have to say anything, and it’s perfect here because it’s amazing. It’s magical.”

The Kennedy Center, a Trumbull-based agency that supports the special needs of children and adults with mental, intellectual, physical and developmental disabilities, launched its first Wow on a Wednesday event. The day was dedicated to showcasing the center’s autism project, catering service and a thriftshop and bookstore at the center.

The center also is introducing a new music therapy, said Amy Dingwall, the center’s autism project, family and community liaison. During the event, steel drummers performed in the center’s parking lot, while speakers played dance music during a zumba class.

Dingwall said she had a personal connection to her work.

“It’s really important to include all people in our community and I’m a parent of an adult with autism,” she said. “I just want people to to look at him like anyone else. So I want people to all come together and see no differences. We’re just all here to do the same thing; to have fun and enjoy ourselves,” Dingwall said.

The live music came about after a chance encounter, according to Stephanie Campbell, the director of donor relations. Cindi DeNatale, part of the Silver Steel Band, has a son who is a client at the Kennedy Center. Campbell was able to convince her to come perform.

Campbell said the drums were crucial to the day’s purpose.

“People in our autism project, particularly, love drums and percussion, it has a positive impact,” Campbell said. “And so we thought, what a great way to start the season with drums because everybody loves it. Everybody feels good.”

The bookstore and thrift shop, now open inside the center, drew a steady stream of shoppers. The center’s Shelton store has drawn so many donations from the community that it was possible to open the second location, according to the vice president of workforce development and social enterprises, Valerie Reyher.

Standing next to racks of donated shoes and clothing, Reyher said the store would benefit those with disabilities by giving them a leg up on employment.

“We are looking to provide those employment opportunities and be a stepping stone for, hopefully, future options for them,’ Reyher said.

The store’s location inside the Kennedy Center’s headquarters is temporary, Reyher said. Center officials are scouting possible permanent locations in Bridgeport and Stratford, she said.

Campbell said everyone at the center, from clients to staff, had been looking forward to the event, the center’s first since 2019.

“Everyone needs to be able to feel good this time,” she said. “We’ve all gone through so much.”